A skid-steer loader, or simply “skidsteer,” is a machine that is commonly used with a variety of attachments that can perform many construction and digging jobs. It is typically used for: Trenching, Drilling, Clearing Snow, Mixing Content, Grinding Stumps and Transporting Material.
Because of their small size, skidsteers are especially useful in construction and repair projects where the area is limited. Skidsteers offer amazing maneuverability and lifting capacity making them ideal for jobs that require a lighter weight machine.

Skidsteers are usually four-wheel vehicles, though some come with continuous tracks instead. Usually, the wheels operate on one steering mechanism which allows the wheel pairs to run at different speeds and turn the machine by skidding the wheels across the ground. Skidsteers have a zero-radius turn giving them the ability to maneuver easily in jobs that have limited space.
The lift arms on the skidsteer pivots behind the cab, lifting the arms up and over the cab. This gives the machine a greater height for dumping. Tilt cylinders allow the attachment to be tilted up and down. The most common attachment is the bucket, but skidsteers have an array of attachment options including pallet forks, grapple, mulching head, snow blade, and others. 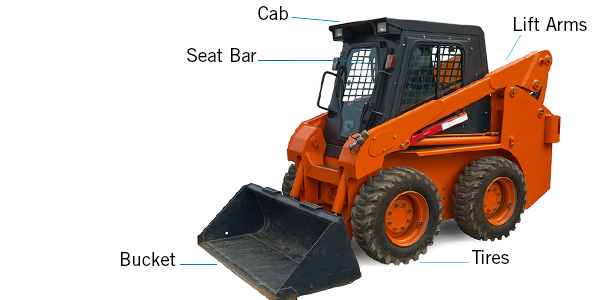 When comparing manufacturers and models it is important to consider the following:

Productivity can stall if an operator is constantly having to get in and out of a machine that is difficult to climb in and out of, so assess how often the operator will need to leave the cab and check for ease of use. Also, consider the machine’s controls and visibility once in the cab.

The skidsteer you choose should have tires that can safely handle the terrain you’ll be working on. Standard duty tires may not hold up to more difficult terrains, so checking the tires is important. You don’t want to shell out for a machine only to turn around and spend nearly as much on new tires.

There are several popular manufacturers in the skidsteer market including Bobcat, Caterpillar, CASE, Volvo, John Deere, and New Holland. 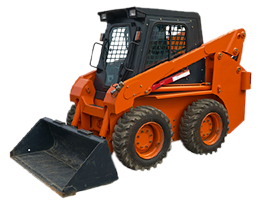