An excavator is a heavy equipment vehicle used in a wide range of projects. These powerful machines can be equipped to crush, bore, rip, cut, and lift material. It is commonly used for: Road Building, Mining, River dredging, Forestry, Construction and Snow removal.
Excavators provide digging force that evacuate and move large objects. The machines are perfect for small and large-scale projects that require heavy duty excavation. In addition, they are often used during demolition because of their ability to cut through objects and move debris.

Excavators are propelled using continuous tracks that provide stability on rough terrain. Additionally, the house of the machine holds the cab and the counterweight, which provides balance while the excavator is lifting. The excavator’s primary tools are the arm and boom and bucket.

The bucket is the piece at the end of the arm used to dig, scoop, and carry earth or other materials. The bucket has teeth that help it break and rip objects.

Hydraulics power the arm and boom which move the bucket to desired locations. They can extend outward, downward, and back again as they lift dirt or debris from the ground.

The best way to determine which manufacturer and model to buy when looking for an excavator is by determining the size of jobs you wish to take. If you purchase one that is stronger than you need, you could be wasting money on fuel, transport, and a costlier machine. If you select one that isn’t powerful enough for the job, you will struggle to complete the project. Here are the things you should consider before purchasing:

Most excavators have mono booms. This type of arm has no movement aside from straight up and down. Knuckle Booms, like the mono boom, can go up and down, but they also can move to the left and right in line with the machine.

Smaller excavators typically dig to only 6’ while large excavators can dig up to 42’ from the surface. It is important to assess how deep the digging must go when determining what excavator to purchase.

Understanding the counterweight and how it supports the operating weight is crucial to buying an excavator. Know your estimated load and evaluate potential purchases and how they can safely support the load.

Excavators operate on diesel engines and are regulated for carbon emissions. It is important to assess the diesel engine to determine if it operates on clean diesel fuel or regular diesel fuel, and whether it operates within federal and state regulations.

There are several popular manufacturers in the excavator market including John Deere, Caterpillar, Komatsu, Hitachi, and Kobelco. 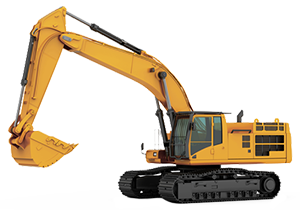